Here we are nine months later and it's the first time I've even thought about posting a blog.

A lot has happened in that time.

Our house sold in four weeks on the market and we had a quick settlement that gave us three weeks to move out. We moved in with my crazy but lovely parents. ( what have they done! ) Four adults and three boys in a 3 bed, 1 bath house.

We found our dream property, 5 acres at Mount Vincent. It has 360 degree views of the mountains and valley. I get excited every time we drive there. We settled on the farm in August and the craziness continued. It's vacant land so we have to build something on it. We decided on a big barn. I have been project manager and I have to say it's been fun. Have to watch those pennies though. 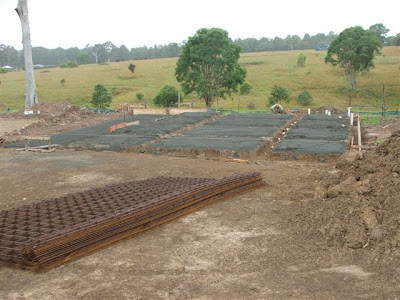 Right now we are at the main frame construction stage. The slab is down and the building is rising. We need to be living there before school starts 2009. The kids are already enrolled in the local schools so we are loaning a caravan from some fantastic friends for a few months and we are pitching my dads giant tent to get us by for a few months. Lucky we like camping
The main thing is that we get the bathroom working or the experience could be life damaging. 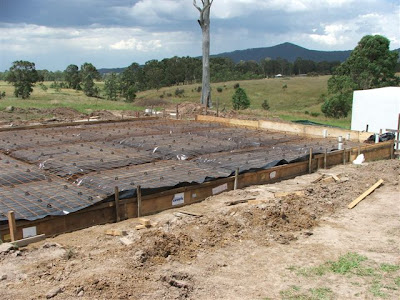 The photos are of the prep that goes into a slab. You can see the water tank on the right, this means no more standing in the shower washing my hair. It's over to the basin for that sort of thing.
Anyhow I best go now. I better go and organise something.
Cheers Leanne
Posted by Leanne at 12:07 No comments: