All About Sewing- Retreat 2011

The forecast was for rain.
Perfect for a weekend of sewing.
Most of the ladies arrived at Raffertys Resort on Friday afternoon. We had our machines set up even before we put our bags in our cottages.
There was excitement in the air.
A few ladies did a bit of sewing that night but it was mostly about catching up with friends. We had a yummy dinner at the Thai restaurant and then off for a good night sleep before a full day of sewing.
Saturday morning saw us up bright and early for a buffet breakfast ( can you see a pattern starting here ).

We tore ourselves away from the buffet and headed to the conference room. 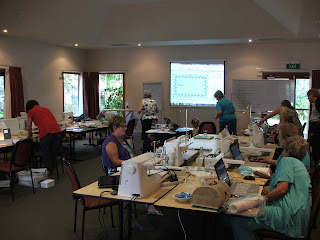 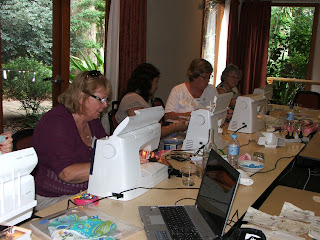 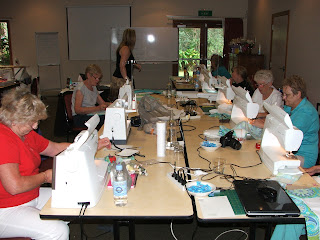 The Machine Embroidery Girls
Off sewing. There was two groups. The machine embroidery girls that had a set project to do. Then there were the general sewers. That was Jan, myself and the Tuesday girls, as we affectionately call them. Lots of laughs and chatting and a bit of sewing and all of a sudden it's morning tea. ( the pattern ). The day went so fast. There was trivia, which was loads of fun. Lots of different projects to be inspired by and ofcourse chatting about anything and everything. We accomplished a fair bit though.
Dinner!! What more can I say... I will be going back to this restaurant again. Al Lago for anyone that's interested. The food was divine. We were all so full from during the day (  morning tea then lunch then afternoon tea ). But we managed...


A couple of bottles glasses of wine later and the chatter was really flowing. (along with the wine)  We didn't sew after the consumption of alcohol though. A few of us were up late just chatting and laughing into the night. (my cheeks were so sore from laughing). 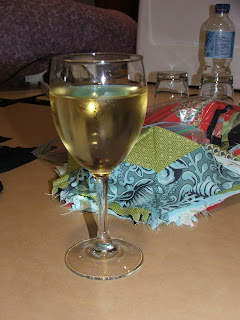 A glass of Chardy in good company with Neptune by Tula Pink.
Sunday and no-one really wanted breakfast. We were still full from the day before. A piece of toast and straight into it. The machine embroidery girls finished their project the day before so it was just free sewing.

After lunch I was booked in for a massage. Oh!! it was so relaxing. I need to do it more often. I was so relaxed I couldn't sew anymore. The weekend was coming to an end. 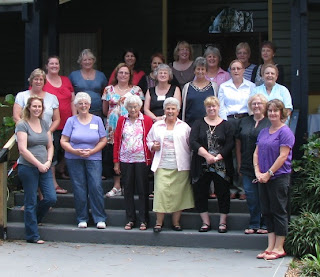 I had such a great time. We have already booked for next year.
Thanks to all the lovely ladies for their company . 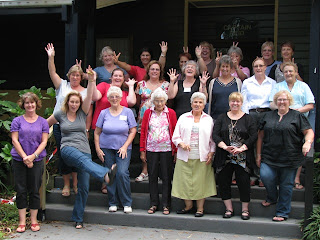 This weekend is "The Retreat". *Squeal*
A group of ladies from the shop where I work are spending the weekend together to sew , laugh, sew, swim, sew and my favourite, have a massage.!!
We are staying at Raffertys Resort, a beautiful place on the shores of Lake Macquarie.
I already have all my projects packed and ready to go. Suppose I should take some spare clothes. Ha.
I still have a bunch of quilting to get done before I go, so back to it.
Will be back Monday with photos
Happy Quilting
Leanne
Posted by Leanne at 20:41 2 comments:

Email ThisBlogThis!Share to TwitterShare to FacebookShare to Pinterest
Labels: retreat

Milly and I are back to work. All is good so far.
This is the back of the quilt I finished today. 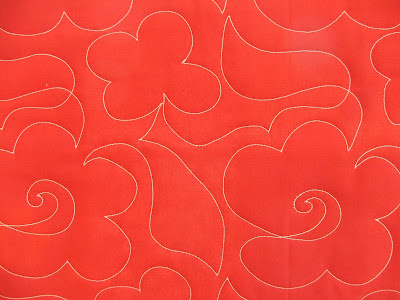 I never liked using a contrasting thread on the back before. I had to with this quilt as the front needed to be off white. I think it looks fantastic...
Happy Quilting
Leanne
Posted by Leanne at 14:52 7 comments:

I have successfully quilted one quilt!!! It looks like the bugs are out of Milly.
It really got me down. I tried to keep busy while she was out of action but I really missed not being able to quilt.
I feel much better now. I shook the blues away and am looking forward.
My husband,Paul, has been great. At first he was as angry as me that we had bought a dud. During the breakdown it was him that sorted out the problem and true to his style, he just fixed it. He is so clever and I wouldn't be up and going without him. So thank you my Love.

I did get lots of stitching done  in the meantime. I have been working on a quilt that I will be submitting to a magazine. 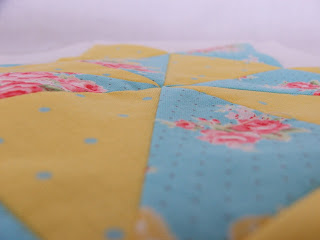 It is made from Flower Sugar by Lecien. This fabric line is so beautiful. I can't wait to show it to you.
Back to quilting I go....
Happy Quilting
Leanne
Posted by Leanne at 11:29 2 comments: